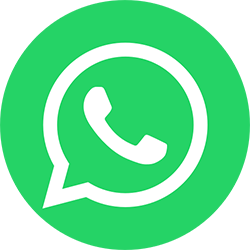 WHAT ARE HEAD SHAPE ABNORMALITIES?

Head Shape Abnormalities such as plagiocephaly, scaphocephaly, and brachycephaly are deformities, flatness, or asymmetry, in the skulls of infants seen before and after birth.

A common misconception is that skull deformation in babies is solely due to sleeping position. However, in general, the primary cause of head shape deformity is not related to the sleeping position of babies. The head shape deformity may occur with a combination of other causes, which can start before birth. Head shape abnormalities in infants with open sutures are easily treated by active STARband helmet treatment without surgery. 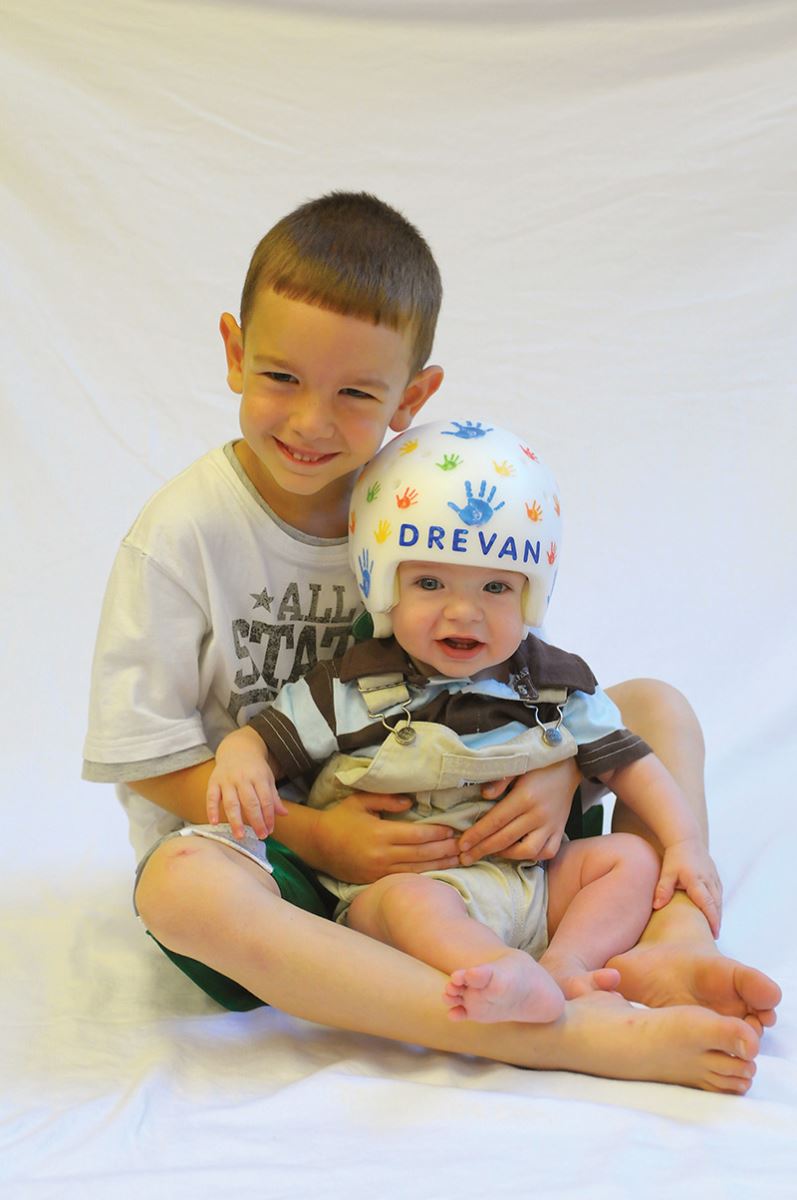 Due to the worldwide Back to Sleep campaign led by the American Academy of Pediatrics beginning in 1992, sudden infant death syndrome (SIDS) has been reduced by 50%. However, as a result of this campaign to prevent sudden infant deaths, there has been a rise in unwanted flatness behind the head. Car seats and baby carriages provide convenience and safety, but also contribute to the increase of head shape abnormalities.  This because infants lie on their backs for long periods of time while in these devices.

Head shape abnormalities occur for a combination of several reasons. Head shape abnormalities are more likely to occur in twins and baby boys. Patients with torticollis are at high risk. Prenatal posture, cesarean section, premature or difficult and long-term births can increase the risk of deformities in the head. Other factors such as lying on one side of the head in the crib for a long time, prolonged use of a car seat, long-term use of a baby swing , baby carriage use, and so on can contribute to the development of a skull deformity.

HEAD SHAPE ABNORMALITIES BASED ON CRANIOSYNOSTOSIS

Another type of head shape deformity occurs due to craniosynostosis. This type of head shape deformity occurs in very few infants, as a ratio of one in two thousand five hundred (1/2500). Skull deformity, as a result of the fusion of one or more sutures in craniosynostosis patients, is corrected after the surgical opening of those closed sutures. After the endoscopic (closed) skull surgery (where only the closed suture is removed without opening the skull), the STARband helmet treatment is applied to achieve a normal shape for the deformed skull. The STARband helmet treatment is rarely used in cases like open (CVR) surgery, where the skull is fully opened and reconstructed manually. For more information, please visit our craniosynostosis webpage.

Another type of head shape deformity occurs for genetic reasons such as Apert, Crouzon, Pfeiffer, Saethre and Chotzen, Carpenter and Jackson, and Weiss syndromes. The head shape abnormalities resulting from these syndromes are also reshaped by the STARband helmet treatment after opening the suture/s. 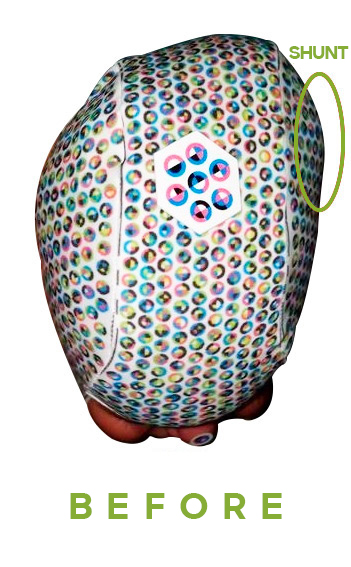 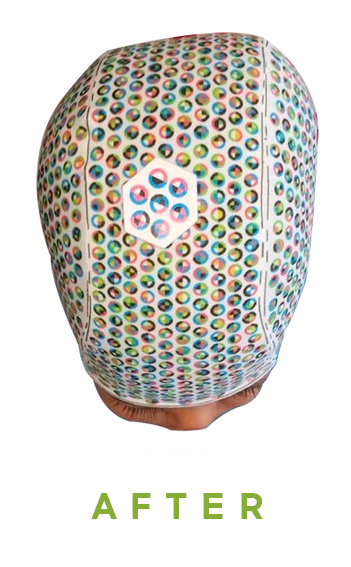 Head shape abnormalities may also occur in patients with hydrocephalus, who have received shunt treatment. After controlling the skull growth of these patients, head shape deformity is corrected with the STARband helmet treatment. These patients should to lie on the opposite side of the inserted shunt for a long time. As a result, the severity of the head shape deformity can be very extreme. Thirty-five percent of babies with a shunt due to hydrocephalus have a head shape deformity. The shunt, placed by the surgeon, must be able to function without any defects. The STARband helmet is the only orthosis that has the ability to correct this deformity while protecting the working shunt. The STARband custom-made design for babies with shunts will redirect the growth of the baby’s skull in order to correct the deformity.

WHAT IS THE IMPORTANCE OF EARLY DIAGNOSIS OF HEAD SHAPE ABNORMALITIES?

Early diagnosis is especially vital for infants with cranial deformity due to craniosynostosis. The head shape deformity in these babies reveals itself after birth and can even be diagnosed in the mother’s womb before they are born.

Although the head circumference continues to grow normally, the head shape deformity begins to become increasingly apparent. The brain, which cannot grow in the direction of closed sutures, continues to grow towards open sutures in the skull. Therefore, the head shape of the craniosynostosis patient begins to deform. It acquires an abnormal shape in terms of symmetry and ratio. Scaphocephaly, trigonocephaly, anterior plagiocephaly (coronal) or posterior plagiocephaly (lambdoid) shapes can occur.  In other words, even as the baby’s head circumference continues to grow within normal growth percentiles, there still may be problems with the growth of the brain and shape of the skull.  It should not be assumed that these problems will simply go away on their own.  Instead, the baby requires the immediate attention of a pediatric neurosurgeon.

With early diagnosis, craniosynostosis patients have the possibility of getting Endoscopic Strip Craniectomy, which is a less invasive method than traditional open surgery. Thanks to endoscopic closed skull surgery, babies can be treated at a younger age, avoiding open surgery. With STARband treatment beginning after an endoscopic surgery, the skull shape will return to its normal shape within 6-9 months.

Early diagnosis of infants with deformational head shapes is important to prevent the progression of the deformity.  The baby should be supported with tummy time exercises and the baby's head should also be repositioned while they are on their back. If there is any tension or resistance of the neck muscles, the help of a physiotherapist should be sought early. In early diagnosed infants, most head shape abnormalities can be prevented by other treatment methods without the need for the STARband helmet treatment.  In these cases, infants can be treated through repositioning, and by conducting exercises and prone position activities.
Monitoring deformities is as important as early diagnosis. Scanning results and reports taken from the STARscanner and the SmartSoc, are compared in order to see if repositioning activities are having an effect on the severity of  the deformity. Using these results can help determine the proper treatment plan.

By the 12th month, babies have completed a significant portion of their brain and skull development. In addition, sutures naturally close significantly. After approximately 3-4 months of age, repositioning has no effect on head shape deformity for a baby who is sitting, crawling, and turning right and left constantly while sleeping.

When helmet treatment is initiated after the 8th month, and especially after the 10-12th month, the risk of not achieving the target is high, even for moderate deformations. There is no guarantee of improvement, particularly for infants who have a severe deformity.

If the deformational head shape abnormalities are left to correct themselves up until twelve months of age, then the window of opportunity for treatment would close. The infant would not have the chance to benefit from repositioning. Helmet therapy, which is also the last treatment, would be no longer possible because there would not be enough growth in the brain and skull.

USE OF IMAGING SCANNING SUCH AS COMPUTERIZED TOMOGRAPHY

A pediatrician can determine what type of head shape deformity your baby has by a clinical assessment (visual examination) without any exposure to radiation due to CT. It is quite easy for a physician, who has a familiar eye, to quickly notice a head deformity during clinical assessment. The CT or MRI may be required by the neurosurgeon for a definitive diagnosis of infants, who have suspected craniosynostosis. By using the harmless FDA approved STARscanner and the SmartSoc 3D scanning systems, infants with suspected craniosynostosis can be followed and comparatively monitored. This is done without using radiation-containing tomography or MRI.

HOW MUCH ARE DEFORMATIONAL HEAD SHAPE ABNORMALITIES AND CRANIOSYNOSTOSIS BASED ON GENETICS?

Research has shown that deformational head shape abnormalities have resulted from external factors. It has long been known that genetics has no role in deformational head shape abnormalities. In contrast, research has proven that syndromic cases of craniosynostosis are genetic. Non-syndromic cases of synostosis such as sagittal, metopic, coronal, and lambdoid suture synostosis are still unclear. Some hold the opinion that these cases are genetic; however, the research has not yet revealed how much of a role genetics plays. 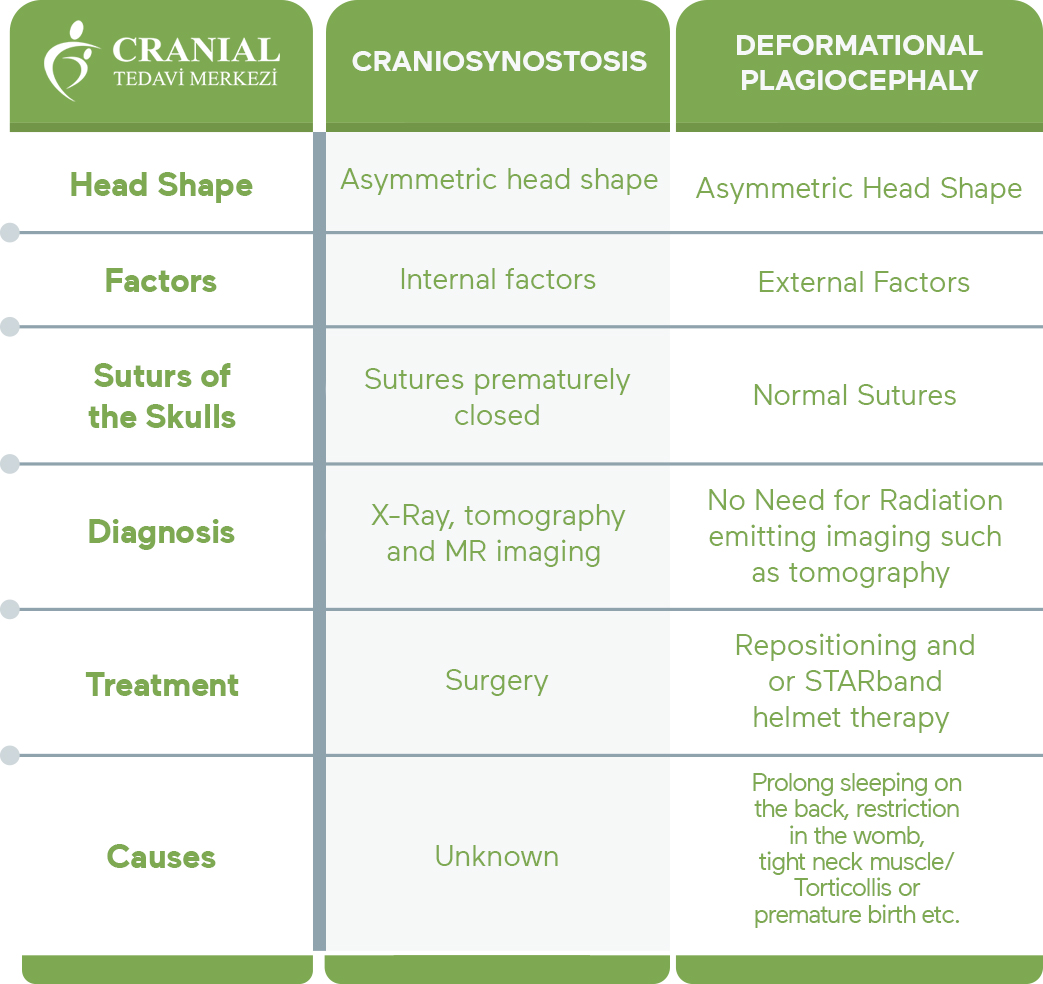 THE DIFFERENCE BETWEEN DEFORMATIONAL PLAGIOCEPHALY AND LAMBDOID SUTURE SYNOSTOSIS

Appearance wise, lambdoid suture synostosis is the closest head shape deformity to deformational plagiocephaly. While craniosynostosis is seen in one in every two thousand five hundred babies (1/2500), lambdoid synostosis cases are exceedingly rare with rates of 1% to 5% of all synostosis cases. Therefore, 1 in 4 infants has deformational plagiocephaly, while only 2 or 3 in every 100,000 babies have lambdoid synostosis. Lambdoid synostosis is easy to distinguish from deformational plagiocephaly with a clinical examination. In the pictures, as seen from the overview, the shift of the ear is in the opposite direction, not to the side of the flatness. When it is looked at from behind, the closed lambdoid suture shows itself as a protruding bone. In addition, the ear on the side of the closed suture is significantly deviated to a lower position as compared to the other ear. There is again a noticeable asymmetry in the head itself; a slope can be seen in the skull on the side where the closed suture exists.

THE DIFFERENCE BETWEEN DEFORMATIONAL SCAPHOCEPHALY AND SAGITTAL SUTURE SYNOSTOSIS

The most common type of craniosynostosis-based head shape abnormality is sagittal suture synostosis, which resembles deformational scaphocephaly. They show distinct and noticeable clinical differences, but in both cases, the head shape deformity is flattened from the sides, the entire forehead protrudes forward, and the back protrudes backward. In sagittal synostosis the forehead is wider and appears as a square, when seen from an overview. The head is coned shape from behind. In deformational scaphocephaly, from the overview, the forehead and the back of the head is seen as an oval skull shape without a boxy forehead or bulging posterior. 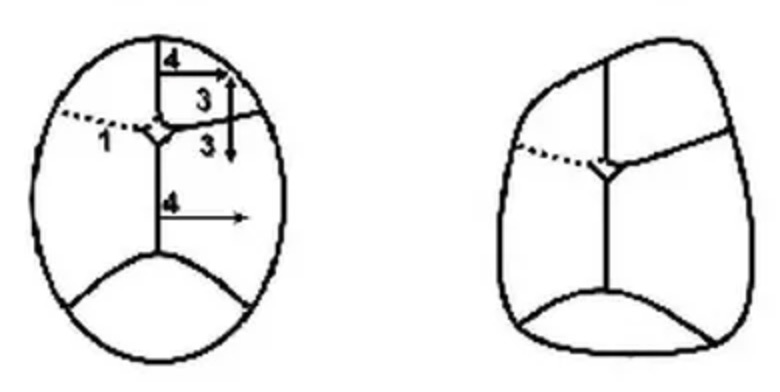 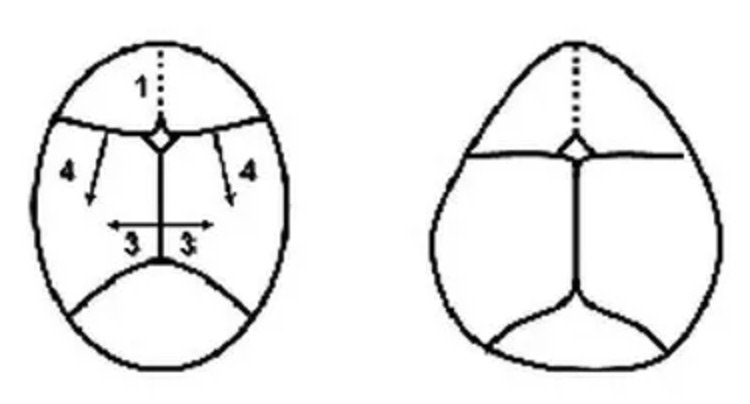